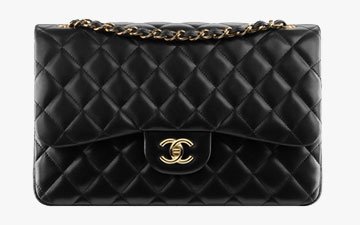 Well, its 2015, a new year full of new opportunities. But what’s more? The Chanel Price Increase of course, duh!

The year 2014 was wild and an exception. First we heard that Chanel might discontinue their best-selling classic, the Grand Shopping Tote also known as the GST. Then on September, around the time that Chanel released the Cruise 2015 Collection, the prices of the ‘boy Bags’ jumped higher than kangaroos. But what made this year different, was the fact that Chanel did not increase the prices of the other classics, like the GST, Cerf Tote, WOC’s and the other Classic Flap Bags.

Many people (including myself) are crossing their fingers and hoping that Chanel will not increase their prices this year. But when looking at the history chart, Chanel ‘always’ increase prices at least twice a year. So they will not make 2015 an exception.

There are two things we’re certain:

1. Chanel punishes everyone that procrastinates.
2. The question about the price increase in 2015 is not ‘WILL THEY’, but ‘WHEN’.

I remembered the story of a girl that went to the Chanel boutique to purchase a Classic Flap Bag. The SA reminds her that the prices went up TODAY. That’s horrible right: ‘sorry, you’re one day late, so you got to pay $300 USD extra’. Yikes!

So far, the rumors about Chanel price increase 2015:

A few members in our community got informed that Chanel will increase prices in January 2015.

Taiwan boutique claim that it will happen on 10 January 2015.

London boutique scratches their head and had no clue.

Chanel SA in Canada wasn’t certain about it, but she’s confident that it will not happen on 15 January 2015.

All right, let’s look at the history chart. Chanel price increases usually happens in February, May or December. So count down and prepare for the hit or you can always beat the price increases by purchasing tomorrow.

We will update this page as soon as we heard something, including new prices when they are announced.

Anyone got news about the Chanel price increase 2015, please drop them in the comments. Thank you!