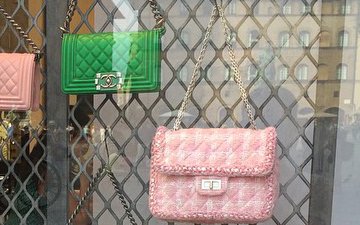 It’s the Chanel Mini Classic Flap Bag, then it’s not.

It’s not made from lambskin or caviar.

And it’s certainly not what we’ve been used to – no black! Thank you

Presenting the Chanel Tweed Pink Flap Bag. First appeared on one of the ‘best’ Chanel ad campaign ever made, the Fall winter 2014 Ad Campaign. And I mean it!

The ad campaign was filled with endless heavenly handbags, a lot of iconic’s, truly a glimpse on what we can expect from the to-be-released collection.

You can use the Chanel Squared Mini Classic Flap Bag as an example, when judging the Tweed Pink Flap Bag. As it got the same shape. Instead of presenting with a CC closure, Karl decided to change the style and craft it with the mademoiselle closure. This is the same closure like the Chanel 2.55 Reissue Flap Bag. Simply gorgeous.

As the title already described, it’s made from tweed and not leather. It comes with a shoulder chain and it’s only available in pink as far as we know now. But its not like awkward or occasional pink, this pink is super cute.

For those who are interested, here are the details: